Being the first day of class, the topic this week was mostly related to laying out the syllabus and course expectations. On one hand, this is kind of ho-hum stuff, but on the other it’s a bit anxiety-provoking for me because it’s setting the table for all classes to come. Not in terms of content necessarily, but in terms of norm-setting and cultivating a sense of safety.

The psychologist (and parent!) in me knows about modeling behavior I want to see acted out and the community manager in me knows how important it is to feel safe in a space that’s bound to have significantly different views, life experiences, and levels of familiarity with the material. Another layer of difficulty is, going in, I had no idea how many students would be game dev and how many would be from the psychology program. The coexistence of these two programs in one has been on the biggest challenges of making this course.

Obviously psych and games go together, both in my brain and in the wider world. However, for the most part, my game dev students have had little to know experience in terms of psychology as a science or mental health and I can’t expect my psychology student (I have one from the psych program and that just makes me so delighted!) to know about Mechanics Dynamics and Aesthetics.

So week one was probably a bigger learning moment for me than for my students. During introductions I had them share what program they were from and why they wanted to take the course. It’s a question I wish I could ask way in advance; I advocate for user-centered design in both psych and in games and it always feels so awkward to design the thing first and then share it with students. Hope you like it!

Anyway, we get through introductions and the syllabus and then it was time for a speed run through the history of games and the history of psychology that would make GDQ proud. First up, I talked about the history of psychology and mental illness starting with trephination in 5000 bce. Obviously we talked about Hippocrates and the humours as well as the Greek pantheon of philosophers – Socrates, Plato, and Aristotle. I also brought up the work of Abu Zayd al-Balkhi, a 9th century Persian pioneer in psychotherapy, psychophysiology and psychosomatic medicine. It was important to point out, for me at least, that both the Greeks and the Persians as well as eastern cultures treated mental illness with things like plentiful sunlight, diet, and exercise. This being in contrast to Ancient Rome and pretty much all of Europe who be like: 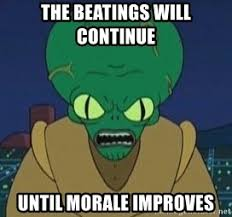 We talked about psychiatric hospitals and, of course, modern psychology. This was definitely something I struggled with since I wasn’t, and still are not, sure with how much will be relevant for my students to know. I talked a bit about Freud, his theory of the unconscious and the impact of childhood on development, but didn’t mention any other psychoanalysts. Same with talking about Pavlov and Skinner as behaviorists. I didn’t even mention specific people when talking about cognitive, humanistic, cross-cultural, or evolutionary psychologies. This is one of the fundamental tensions I have with this course: I think this stuff is fascinating and important but I also recognize this is a games course and knowing about Karen Horney’s theory on womb envy might not be applicable. I think I walked a good line, but ¯\_(ツ)_/¯ .

Last but not least I talked about why tying these two disciplines together matters. Mostly it’s because they’re irrevocably intertwined anyway. As I told my class, games are psychology at play. Anyone can make a game, but it takes a level of psychological understanding and perspective to make something someone else would enjoy. Not to mention all the neuroscience behind things like user interface and motivation, but that comes later in the semester. Game devs are constantly pulling from established psychological principles, knowingly or through gut instinct, and psych could definitely benefit from doing the same with games. Games are masters of engagement and if a psychologist could get their client to engage in treatment the way they engage with Mario Kart, the world would be a better place. If games are psychology at play, then psychology is psychology at work.

Games are psychology at play.

And that was it. It definitely didn’t take the entire 2.5 hours but I find I typically don’t take the whole time on the first day, probably because I’m still shaking off break just like my students. (This is also only the second time I’ve taught, so my sample size is pretty small). For next weeks, I’ve asked my students to email with any accommodation needs as well as any sensitive topics I should be aware of. Given the nature of the course, we’re going to be talking openly and in-depth about mental illness. I already have content warnings in place, but you can never predict every trauma.

I’ve also asked them to either play or watch a walkthrough of Elder Scrolls: Shivering Isles and email me a list of 3 mental health tropes or portrayals they observe during gameplay. This was another moment in class where I got a bit of a reality check. One student was brave enough to asked what a mental health trope was – something I should have covered during the first class if I’d wanted them to do homework on it. Rookie mistake. So I relaxed it a bit to include observations as any portrayals, including characters, dialog, places, etc.

Next week’s topic is an introduction and overview of mental health representation in games and the plan is to play Shivering Isles in class.

Batti, B. (July 20, 2015). Why representation matters: On identification and diversity in video games. Not Your Momma’s Gamer.

Assignment 1: Before class, email 3 mental health tropes or portrayals you noticed playing/ watching/ reading about Shivering Isles. For those who don’t have access to gameplay, you can watch a short walkthrough here.

One reply on “The Psychology of Video Games: Week 1”

Loved reading about your first class – clearly your passion shines, and I learn a lot as well. Wishing you continued joy Dr. Prof. Dunlap!